1) What are motion simulators?

Motion simulators attempt to reproduce the physical sensations you can experience when driving a vehicle. And everything you can feel in a vehicle comes from forces. At any moment you can feel the "G-forces" and vibration forces through your muscles, joints, organs and inner ear. Motion simulators tremendously increase immersion in all games, and allow a finer control of virtual planes and cars in flight simulators and racing simulators.

Therefore, motion simulators attempt to reproduce forces you can feel when driving a vehicle.

2) How can we compare motion simulators?

By comparing their ability to reproduce forces. A motion simulator should be able to reproduce sustained and short forces instantly without giving parasitic forces (forces which do not exist in the simulated vehicle). It is very important to feel the forces as quickly as possible.  A 0.3 second delay in force reproduction is enough to prevent a driver from driving straight! In the world of motion simulators, size does not matter as much as reactivity!

3) How do motion simulators work?

The traditional solution is to move and tilt the cockpit or the user seat. That's what I call the "move and tilt" approach. To work convincingly, it requires an expensive motion simulator with large motion/tilt range and multiple, very strong actuators.

4) How does the GS-Cobra work? 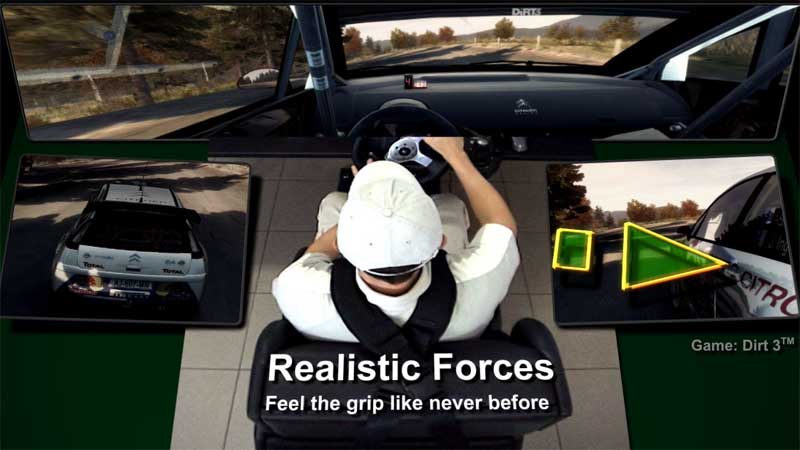 The GS-Cobra is a force feedback motion simulator. We want forces, short and sustained, immediately. Instead of moving and tilting the user to reproduce indirectly the forces, the GS-Cobra applies directly forces to your body.

The upper part of the backrest can push in any horizontal direction, thanks to two powerful electric  actuators and a harness. When no force has to be simulated, it behaves like the backrest of a normal seat, firmly pressing against your upper torso.

But when a force has to be simulated, the backrest can reproduce instantly strong and detailed forces in any horizontal direction (up to 40 pounds/18Kg).

It is very close to what happens in a vehicle: your legs and lower torso stay in place without much effort, but you have to resist the G-forces with your upper torso.

5) How does the GS-Cobra compares with other motion simulators in terms of sensations?

The sensations are different. With the GS-Cobra you actively take part in the simulation. Your muscles contract naturally to resist the G-forces like in a real vehicle. You can feel the G-forces through your muscles and joints. This is entirely different from a motion simulator in which you are passively moved within a short range, before being left without any sensation as soon as the motion range is covered.
There is the same dynamic you have in a real vehicle: for example when pressing the brakes, your body expects a forward force and your legs, thighs, abs and back muscles contract at the same time to keep your torso straight. The same applies here; there is this real time feedback loop between the simulated vehicle and your entire body, very natural and intuitive.
In the pictures below you can see in yellow the muscles stimulated by the GS-Cobra in different situations:

6) What are the GS-Cobra performances?

The GS-Cobra accurately reproduces sustained and short forces, without any delay or parasitic force. It gives you in one very compact solution the advantages of fast and slow "move and tilt" motion simulators together without the inconvenients. With up to 40lbs/18kg force available in a few 100th of a second (actuators move at 20 inches per second), you can feel a broad ranges of forces, from the brutal cornering G-forces to the tiny vibrations caused by the track surface. 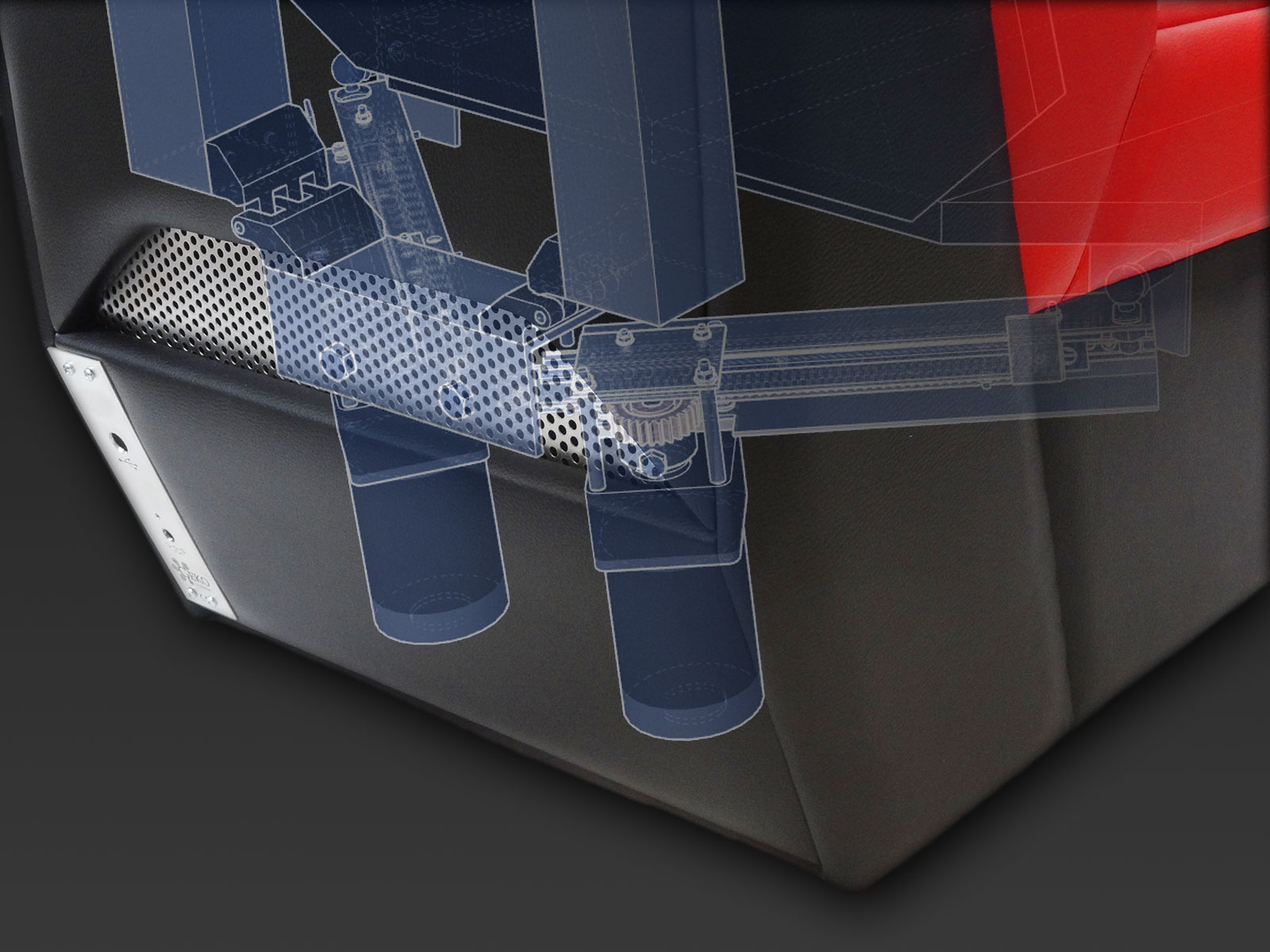 7) Does the GS-Cobra help users?

I have been testing various motion simulators for several years. Many times I had the disappointing feeling I was driving against the motion simulator. I mean the ride was entertaining but I had to ignore the physical sensations to drive correctly, or at least practice a lot to get used to the delay or tilting.

With the GS-Cobra the connection between you and your vehicle is so intuitive, so direct that people with NO previous experience in racing simulation experience a massive progression after few minutes. We repeated this experiment time after time: as soon as you turn the power on, beginner drivers starts feeling the speed, the mass of the vehicle and better control their speed.

The same way, experienced drivers quickly reach their top performance level and use the motion cues to progress further. Later they can use the G-Seat Manager software to adjust the composition of the forces in order to focus precisely on what helps them to progress.

8) How does the GSeat Manager work?

As the GS-Cobra uses an innovative approach, we worked hard to develop a brand new software able to fully use its capabilities: the G-Seat Manager. During our researches, we noticed users prefer to have customized settings. The G-Seat Manager software gives you unlimited tuning possibilities.

In simple mode, you can easily mix the different types of forces felt in a vehicle: trajectory, handling, attitude. In advanced mode, it is the only motion simulator software (to our knowledge) which allows you to adjust separately all frequencies of the forces...from the long sustained forces to the very short lived ones. This is high definition motion simulation. 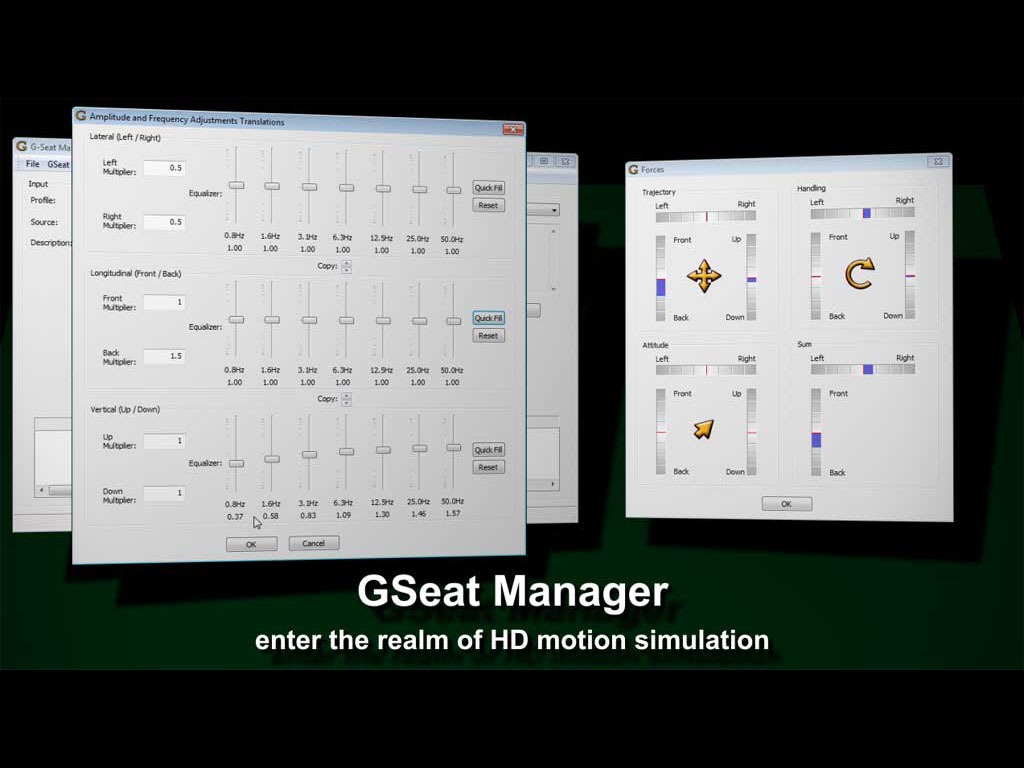 9) What do I need to fully enjoy the GS-Cobra?

We designed the GS-Cobra as simple and compact as possible. It can fit everywhere an office chair does, or be integrated in an existing cockpit for racing or flight simulations.

You need a personal computer able to run the supported games, an analog controller (joystick, wheel), and the supported game you want to play. With the GS-Cobra motion simulator, a large display, a good sound system and controller, you can easily get the best level of immersion available on the market directly at home.

Not only it works well with VR headsets, but it works better in VR than tilting motion simulators. In a GS-Cobra there is no tilting of the body. The head movements are very realistic and correspond to the G-forces: a lateral cornering force will give a slight translation of your head before your muscles react, like in the real situation.

As a result, the head tracking of the VR headset works out of the box in the GS-Cobra, while in tilting motion simulators, the tilting has to be removed from the head tracking, usually with a special software.